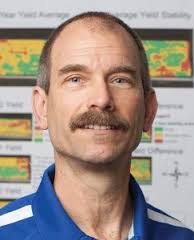 West Hills College Coalinga’s Farm of the Future will welcome a new instructor this summer, as Terry Brase joins the staff.

“For me, he’s just the perfect example of what we were thinking about when we created the Farm of the Future,” said Clint Cowden, Farm of the Future Director.“He’s one of the world’s experts in precision ag, so much so that he literally wrote the book on it. He also has experience in the classroom both at the high school and community college level and in development so not only does he understand the theory but he’s also a practitioner.”

“I am excited about the opportunity to work directly with students again in a classroom setting,” Brase said. “After spending my teaching career to date in Iowa predominantly working with two crops - corn and soybeans, it's exciting have the chance to work in California's diverse agriculture.”

Brase was the originator and first Principal Investigator of AgrowKnowledge, the National Center for Science and Technology in Agriculture, and has won many accolades including the PrecisionAg Award of Excellence in Education in 2012 at the International Precision Ag Conference.

He has served as a mentor for colleges across the country, written a textbook on precision agriculture, has written an online course for ESRI, and assisted with the US Department of Education Career Clusters initiative.  Most recently he has started his own educational consulting company, BrASE LLC, which works with companies to build precision ag educational resources.  He also writes a precision ag column for Western Producer magazine called "Precision Happens."