From delivery of data management service to a ‘Wal-Mart’ mentality taking hold in ag, Precision Farming Dealer’s “most viewed” content in 2016 highlighted the top trends and newsworthy moments from the past year.

The last 12 months offered an abundance of water-cooler conversation developments in precision farming. Acquisitions, partnerships and new product innovations were among the hotter topics discussed within the industry in 2016.

To determine which online and print content attracted the most attention during the last year, the Digital Media Dept. at Lessiter Media crunched the numbers on views, downloads and watches. What follows are summaries of some of the most talked about content published or presented in 2016, both online and in print. The Precision Farming Dealer staff tracks these analytics to keep a pulse on readers’ concerns, feedback and interests to provide informative and actionable content.

To see the original piece (and ensuing industry commentary), you can type the article headline into the Search bar at the upper right hand of the home page at www.PrecisionFarmingDealer.com. 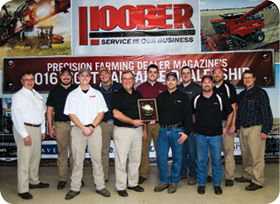 Launched in 2013, the Most Valuable Dealership program annually honors the most profitable and productive precision retailer. Print coverage of the 2016 winner, Hoober Inc., “Building a Profitable Precision Business on the Cornerstones of Service & Stability” had the most online views during the last year. Coverage included a 7-part video series, sidebars on building an RTK network, utilizing a mobile precision training center and a compilation of comments from judges and suppliers on how the dealership differentiates itself from its competition.

With a focused mantra of “service is our business” the 9-location dealership group earned high praise from the panel of independent judges who noted, “They seem to have a true sense of how valuable service is on the precision side and not just a dealership looking to push iron out the door.”

Most Listened To Podcast

Defining Your Role and Scope for Precision Profitability

There’s a temptation for dealers to adopt an “everything to everyone” mentality with precision farming. This is often a recipe for disaster, said Dr. Tom Krill during the most listened to podcast, “Defining Your Role and Scope for Precision Profitability,” the first episode in the brand new series launched 2016, sponsored by Farmers Edge.

The founder of Precision Strategy LLC in Hopkinsville, Ky., outlined his roadmap to success for dealers saying it often starts with the same question from customers, “What’s its payback going to be for me?”

Questions like these need to be answered with an equally pertinent question. “I ask them, ‘What are you going to change?’ If you do things the same way today that you did yesterday, there’s no payback. You’ve got to change,” he says. “You’ve got to make decisions based upon data. Then once you’ve made those decisions, you need to deploy them and carry them out. It’s a process.”

“With seemingly endless cashflows being pumped into tech start-ups by corporate investors, it’s inevitable that more will emerge in precision farming. As reported by AgFunder earlier this year, a record $4.6 billion was invested in the ag technologies sector in 2015, nearly double the amount in 2014. And nearly 500 companies raised financing across 526 deals, a 90% increase in deals over the 264 recorded in 2014.”

Collecting farm data is something farm equipment dealers have become adept at doing. But using that data to help customers make more informed operational decisions is still a challenge for many. In easily the most viewed video of 2016 on the www.PrecisionFarmingDealer.com, editors gathered advice from Josh Zuck, integrated solutions specialist with Sloan Equipment during a visit to the dealership’s Lanark, Ill., store.

Zuck shares his experience and advice on task controller calibration, hybrid uploads and the importance of making sure data is recorded properly to avoid downloading worthless information at the end of the season.

A 3-part webinar series (with a companion print series) sponsored by Agri-Trend tracked the successes and challenges dealerships are having in moving from a hardware-centric business model to more providing data-driven services.

The most viewed webinar in 2016 was the first in the series, “Bridging the Precision Gap: Integrating Agronomic Service for Profit,” where Devin Dubois, vice president of integrated solutions at Western Sales in Rosetown, Sask., shared considerations and advice based on the 6-store dealership’s experience adding full-time agronomists to its staff.

“How will you generate revenue with this? Are you going to charge customers for services by the acre? Will you charge this person’s time as a professional, much like an accountant or a lawyer? Or is this person going to be involved in flat rate services? There are a variety of options.

“Since we’ve stepped into this, we’ve shifted course on trying to collect revenue for the services. We’ve been doing a lot of things by acres, but we’re kind of coming off of that and doing more flat rate and time-based charging. Again, there’s a whole spectrum to choose from.”

Most Viewed What Farmers Want From You

Providing perspectives from farmers on their successes and challenges incorporating technology into their operations has been a staple since Precision Farming Dealer launched in 2012. With topics ranging from compatibility headaches to availability of dealer support, last year’s most read article in the ongoing series was “Looking for Knowledge Opportunities to Leverage Collected Farm Data.”

The feature tracked Wisconsin farmer John Kutz’s struggles with finding local advanced training opportunities for his farm management software platform. “The closest ones to us have been in Minnesota or Indiana. I try to learn as much online as I can, but I still haven’t been able to push the data collection program far enough to take full advantage of its capabilities. For the most part, it is trial and error and self-teaching.”

Is a Wal-Mart Mentality Rooting Itself in Precision Ag?

Venture capital flowed into the ag industry in 2016 and was a topic of interest that garnered a range of opinions. In the editorial “Is a Wal-Mart Mentality Rooting Itself in Precision Ag?,” managing editor Jack Zemlicka analyzed the trend and whether it would continue in the coming years.

“As companies like Google and yes, Wal-Mart, invest resources into new farm technology and data management, what type of influence will these non-ag brands have on the traditional business model?

“With seemingly endless cashflows being pumped into tech start-ups by corporate investors, it’s inevitable that more will emerge in precision farming. As reported by AgFunder earlier in 2016, a record $4.6 billion was invested in the ag technologies sector in 2015, nearly double the amount in 2014. And nearly 500 companies raised financing across 526 deals, a 90% increase in deals over the 264 recorded in 2014.”

The advancement and interest in telematic tools for troubleshooting precision technology problems were showcased in the most downloaded free e-book, “Capitalizing on Opportunities & Efficiencies with Remote Service Technology,” sponsored by AgriSync.

From becoming more mobile with precision service to implementing a “precision farming by remote control” strategy on the farm, the compilation of original articles highlighted both the progress and challenges associated with capitalizing on remote service.