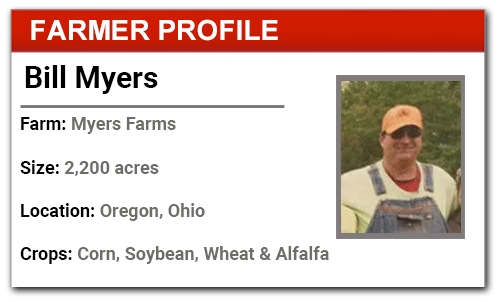 The Myers began their precision farming journey in 1996 when they outfitted their 1983  Gleaner L3 combine with a yield monitor. That’s when Bill Myers, who farms with his son, John, daughter, Rita, and brothers, Robert, and Ivan Jr., began to understand what adjusting crop inputs could do for their bottom line.

“In 2000, we started adapting GPS-controlled systems to guide our sprayer,” Myers says. “By using a lightbar, we dramatically reduced skips and overlaps. We were so impressed that we also set it up on our strip-tillage equipment.”

Until 2012, Myers used planter row markers to stay on the strip, but then upgraded to an RTK signal. Today, they use a Trimble FMX integrated display to control their Cat Challenger 75C tractor that pulls a 12-row Progressive model 6200 strip-till bar with mole knives and a 6-ton stainless steel fertilizer box that also fall-applies a straight rate of soft-rock phosphate.

The Myers soil-mapped a third of their acres each of the last 3 years. As they are coming into their fourth year, they’ll circle back onto the first year’s sample maps to see how they’ve moved the needle on soil fertility and how their fine-tuned rates have affected yields and overall profitability.

“Our soils fall into three types of similar clay, so we don’t use variable-rate seeding or even fertilizer application with the planter. Our variable fertilizer rates are applied with our Prowler GVM spreader with a Raven Viper display that uses a WAAS signal and controls the hydraulic drive to vary rates, based on maps developed by Helena agronomists.

“We are in the Maumee River watershed and are concerned about nutrient runoff,” Myers says. “Mapping helps improve fertility in lower-yielding areas without over applying areas with higher fertility. Overall, the mapping has reduced fertilizer costs and we’ve also seen a yield response in areas that have lower yields.”

The Myers run a mixed fleet of older equipment and report few problems in getting systems to work together. The FMX unit used for strip-tillage is transferred to a Deutz-Fahr DX140 tractor that pulls a White 9816 16-row planter.

“We went to a junkyard and found a steering wheel we adapted to make an auto-steering system for $45,” Myers says. “We proved you can modify older equipment to make it work with RTK guidance.”

The first year the Myers switched to the RTK signal, they had some fade and signal outages on their far-northern fields.

"At times, we’d lose the signal,” Myers says. “Our dealer, Greenfield Ag, added another signal location in the area the next year. It has helped, but it is still not perfect.”

Myers says he’s fortunate his children are familiar with technology, so they rarely have issues getting systems to work correctly. His son, John, refuses to work without the RTK signal, but Myers says he could still plant using planter markers — if he were allowed.

“John insists the system should be working correctly and if it isn’t, we don’t move,” Myers says.