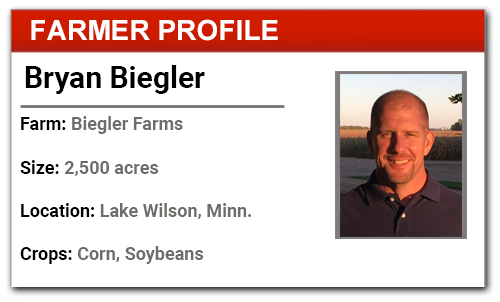 With nearly 10 years of precision farming experience under his belt, Bryan Biegler continues his journey to fine-tune inputs and better monitor his results with an evolving equipment lineup.

He operates 2,500 acres of no-till soybeans and strip-tilled corn near Lake Wilson, Minn. Although his implement fleet is predominantly Case IH, he has a mix of precision farming monitors for auto-steering and variable-rate control.

“We started out with Ag Leader and some original equipment from Case IH, but we have gone to a Trimble 2050 controller following an RTK signal for auto-steering and a Precision Planting 2020 system to control seed rate in the spring and monitor yields in the fall,” Biegler says. “I like the 20/20 unit because it is easier for me to use and sends the information directly to the cloud.”

He also uses the Trimble unit for sprayer steering and section control. The majority of Biegler’s soybeans are no-tilled and corn is strip-tilled, however, he will vertically till some areas to help dry it out.

“We seem to add a little more equipment every year,” Biegler says. With his current  strip-till system, he makes a fall pass, applying phosphorous (P), potassium (K) plus some sulfur.

“It’s a 16-row hybrid unit I put together with a B&D Metalworks toolbar and then I added a Montag hopper and Niffty Ag strip-tillage units,” Biegler says. “The unit also has implement steering. If I go to a 24-row planter, I’ll find a 12-row three-point hitch-mounted strip-till bar to best match the planter and eliminate the need for implement steering.”

In 2017, he added Precision Planting CleanSweep units to better clear a path for improved seed placement. A third Trimble 2050 unit can be found in his Hagie self-propelled sprayer and he uses the Magnum 260 to pull the grain cart in the field.

Biegler reports few issues with the Trimble-Precision Planting controller combination he uses at planting. However, he would like to have fewer monitors in the cab.

“It can get claustrophobic, but I chose the Trimble controller because it was the easiest to hook into the Case IH auto-steering system,” he says. “In the next 5 years, I hope to consolidate systems so I need to use only one monitor.”

Another area he would like to see improved is the writing style used on websites where he finds troubleshooting recommendations.

“It’s frustrating when the technicians or documentation doesn’t use farmer terms,” Biegler says. “When they use engineering jargon, it can take a while to figure out exactly what they are saying.”

He says that’s especially true when you are using seasonal equipment and it’s easy to forget some important points.

“For example, one time, out of the blue, the auto-steering system quit working. I shut off the system, then rebooted it and it still wouldn’t work,” Biegler says. “I finally broke down and called my Trimble dealer, and he suggested shutting off the tractor, too, then rebooting the whole system. That worked. A simple fix, but it required a call to the dealer to figure it out.”