Change is Key to Survival for Precision Farming Dealers

When faced with the challenges of a tumultuous year, Arlin Sorensen advises business owners to leverage new opportunities and chart a path to success.

Entrepreneur Arlin Sorensen understands that taking risks and embracing uncertainty can be intimidating. However, he believes those actions are the key to success for business owners — especially right now.

“Things are different than we’ve ever seen before,” says the founder of HTS Ag in Harlan, Iowa. “Whether we like it or not, the world has changed, and it will continue to change. Our ability to adapt to that change is going to determine how we come through.”

Sorenson knows that for many dealers, it would be easier — and preferable — to retreat to the way things were before COVID-19. However, he says that’s an impossibility.

“The world is a different place,” Sorensen says. “Some things will return to a pre-COVID normal, but we’re going to see a significant number of changes. The sooner we accept that and embrace it, the better off we’re going to be.”

According to Sorensen, some of those changes have been necessitated by the pandemic, but many of them pre-date COVID.

“AI is going to play a significant role, and we need to be involved in that,” Sorensen says. “Autonomy is happening. Drones are starting to come in and actually provide some value. Vertical farming is a reality.”

“Millennials are over 50% of the workforce today,” he says. “That’s going to drive change in a lot of different ways. It’s important that we stay ahead of that.”

Sorensen advises dealers to focus on new opportunities created by changes in the agricultural sphere, rather than dwell on the frustrations those changes may yield.

“We can’t let circumstances control us and push us down,” he says. “There’s plenty of opportunity ahead of us. We have to connect that opportunity to our mission, vision and values. Those are going to be guiding lights that we have to stay close to. As we do that, we can build a strategy and a plan.

“This isn’t going to be rocket science — this is going to be setting a course and executing.”

Define a Strategy & Plan to Execute It

According to Sorensen, developing a clear strategy is an important starting point. He says dealers should determine the goals they wish to accomplish, along with the lasting impact they’re hoping to have.

“Strategy is the foundation,” Sorensen says. “If you don’t have your strategy set, you’re going to waver in the next year or two.”

He stresses the benefits of using tools such as StratOp, Gazelles or Strategyzer to define a goal and make a plan to achieve it. 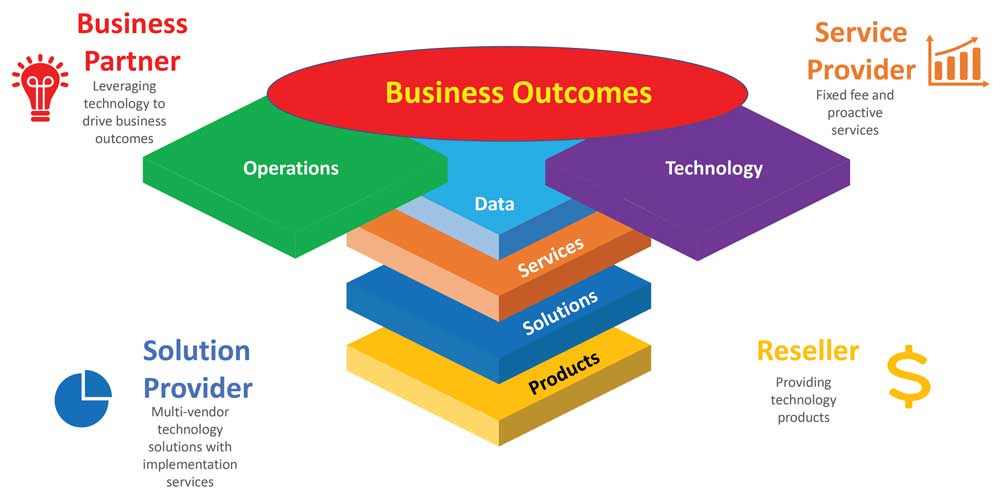 The next focal point for precision technology will be business outcomes, says Arlin Sorensen, founder of HTS Ag. Dealers need to be thinking about how they are going to help growers make more money with the investment they make.

“Those things go hand in hand,” Sorensen says. “You set the strategy, then you create the business plan which is your 1-year path to the future. Of course, you have to execute that plan, so you need to have execution strategies as part of that business plan.”

Sorensen says it’s key to list out the steps that need to be taken in order to keep moving toward the established strategy. Without that, he says, success will be difficult to achieve.

“Without the plan to execute, you might get a few things done, mostly by accident,” Sorensen says. “But you will not achieve what you’re setting out to do.”

Once the strategy and business plan are established, Sorensen says it’s crucial to have a solid communication method for informing employees and clients of the intended outcomes.

“Communication is the secret sauce,” he says. “I could provide the exact same business plan to 100 companies, and 90% of them wouldn’t execute it because they don’t communicate it.”

“Strategy is the foundation. If you don’t have your strategy set, you’re going to waver in the next year or two…” – Arlin Sorensen

“Mix it up,” he says. “Do it with email, with voice, with video, with text. Use all the tools to connect.”

Sorensen says dealers should be developing strategies and business plans with an eye toward what he views as the next focal point in precision technology — business outcomes.

“How are we going to help growers make more money with the investment they make?” he asks.

According to Sorensen, finding the answer to that question will require data management, a solid business strategy and the ability to provide farmers with actionable insights.

“We’re going to have to get to the place where we can really show ROI for the investment that’s being made,” he says. “We do that by focusing on business outcomes.”

Sorensen says that shift in focus will necessitate hiring team members who can meet farmers’ needs in a way that hasn’t previously been done.

“The people we’re going to need on our teams are going to have to have the ability to talk about business,” he says. “Farms are growing. The size of operations are continuing to scale up. As that happens, they become much more business focused.” 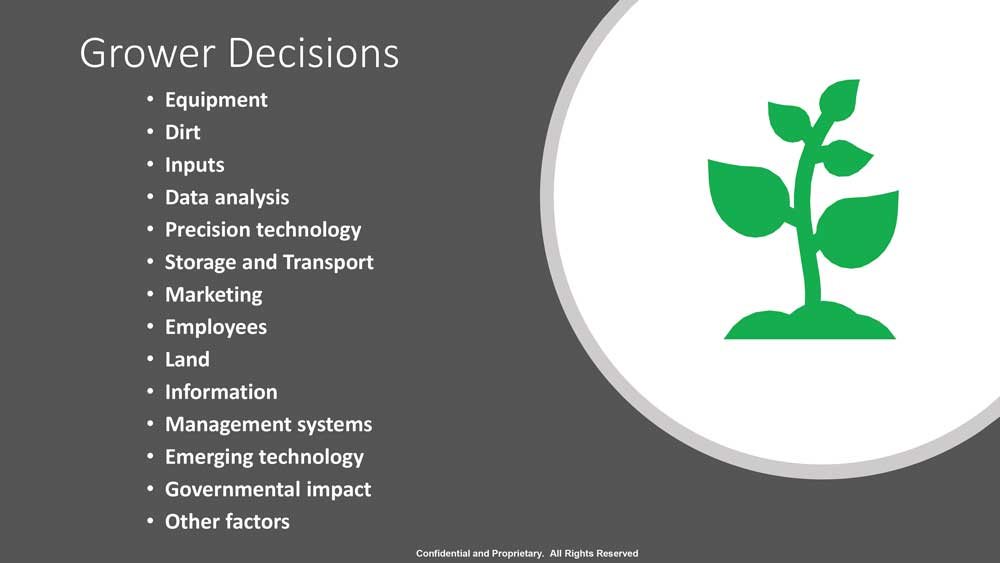 Arlin Sorensen, founder of HTS Ag, says dealers need to be prepared to help their customers with the decision-making process. That assistance could come from direct conversation with the farmer or by connecting them with other partners.

One thing Sorensen considers when he looks at business outcomes is the variety of decisions a grower needs to address throughout the year. He believes it’s key that dealers are prepared to assist farmers with that decision-making process, whether it’s through conversation with the farmer or by connecting that farmer to partners who can provide guidance and support.

“That’s where I think there’s a huge opportunity,” Sorensen says. “We can build some of these skills into our teams, but we’re going to need to partner with others to be able to really serve the needs of the organizations we deliver services to. If we don’t do it, someone else will. That’s the reality that we’re up against. There’s a huge opportunity, and someone’s going to fill it. This is where we can bring value and help deliver ROI.

“It’s different than what we’re accustomed to, but it’s a significant place for us to make an impact.”

Sorenson says farmers are looking for support with data management, as well as more businesslike solutions. While he believes dealers have taken some of the steps needed to help drive business outcomes for their customers, there is still work to be done.

“How are we going to use all the information we’ve been collecting for years, and marry that to the technology that’s available today, to get the best business outcome we possibly can?” Sorensen says. “That is a huge opportunity. It’s the thing that will change our relationship with a grower, and it gives us a chance to truly make a difference in their operation.”

Cultivating Leaders is Key to Success

Something that’s particularly important right now, Sorensen says, is leadership. Although he acknowledges that not everyone feels they have the skills to be a leader, he disagrees.

“Leadership is about our behavior, not our position,” he says. “We all have the opportunity to lead. Sometimes that leadership looks like influence, or helping explain. Other times it’s a much different kind of leadership. But we all are leaders, and we all have to step up and act as leaders.”

He says business owners must look for ways to invest in the people who work for them in order to build leadership within their organization. Doing that will support dealership growth and development, according to Sorensen.

According HTS Ag founder Arlin Sorensen, leadership is about an individual’s behavior and not their position. He shares the list above as behaviors and actions dealership leaders need to embody.

Sorenson maintains that the best leaders realize leadership is a team sport.

“It’s not about you,” he says. “It’s about the people around you. Successful leaders build other leaders who are good enough to replace them. We’ve got to make those kinds of investments and hire those kinds of people.”

“This is something most entrepreneurs really struggle with,” he says. “We have to celebrate the wins. Your team needs that. They need to feel successful.”

Sorensen cautions against listening to the naysayers. While some people might be quick to say a new idea or strategy won’t work, he says it’s important to resist getting caught up in that line of thinking.

“Nobody likes change — that’s the bottom line,” Sorensen says. “It’s true that we’ve never been here before. We’ve never faced the kind of situation we’re in today. But that doesn’t mean there’s not opportunity — and that opportunity is likely going to come when we do things that are different and not the norm.”

“It’s not about you. It’s about the people around you. Successful leaders build other leaders who are good enough to replace them…” – Arlin Sorensen

He knows it takes effort to support growers and farmers as they adapt, but he also believes it’s necessary in order to survive in a constantly changing world.

“Everything that happens in a business has a life cycle,” Sorensen says. “It grows, it matures and it begins to decline. If we don’t do anything about it, it becomes irrelevant.”

Ultimately, Sorensen remains encouraged by — and excited about — the opportunities he believes are available as a result of the upheaval of the past year, and he encourages dealers to feel the same.

“Don’t look at the current situation and feel like we’re hopeless,” he says. “We’re not. Go listen to your growers, understand their needs, figure out how to serve those needs and go disrupt the marketplace. It’s going to look different. It’s going to be based on business outcome, not just making things work.

Creating Precision Opportunity Out of Crisis Training an Entire Dealership to be Precision SavvyPreparing Your Dealership to Sell & Service Autonomous EquipmentManage the Minutia of a Precision Business to Achieve Measurable GrowthNobody Knows it All, But it Pays to Have a LifelineChange is Key to Survival for Precision Farming Dealers

Dealer-Only Event on Precision Farming for January is SOLD OUT