Home / Blogs / From the Virtual Terminal / ID That Connector: An Overview of Common Connectors

ID That Connector: An Overview of Common Connectors

By John Dignan posted on October 9, 2015 | Posted in Equipment Compatibility

I’ve done it myself many times where I MUST know what voltages and signals are present on the wires involved, but don’t have connectors to build an adapter. I’ve cut into the cable cover and hook up my test leads to individual wires. It works, but it traches the connector and overall circuit.

To repair the cut in point you need pins, or sockets, maybe the connector body and the tool to install it or solder the pins in. With the right parts, tools and instructions, you can repair any connection to “as new” status. I hope the following column (the first in a 5-part series) will get you on the right path to successful repairs. 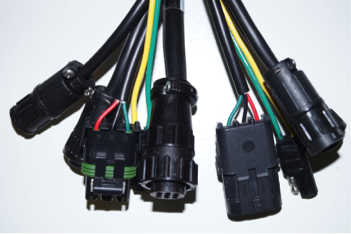 I started researching connectors in an effort to create adapters for the harnesses involved in my Ag-Tester product line. The cable shown in Figure 1 is a Tee harness used to interface with any Raven boom or control valve. One group on the input side going to the display and the other group connects to the valve. From those connections I can adapt to virtually any valve used in the industry.

My old friends at Ag Express build all my harnessing and they are very good at it. Before I can have them build harnesses I need to know what I want. As they explained to me early on, they are not in the research business. I’ve been on a mission the last couple of months finding out who’s who in the connector world and tracking down catalogs and suppliers. I hope to save you some of the research pain. 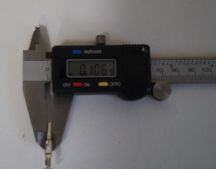 When identifying connectors remember; “It’s all in the details.” If you don’t have a digital micrometer, buy one! It’s a well-spent $30 or so at the home improvement store.

You’re going to find the connector measurements are either in 1/1000 (0.001) of an inch. It took me a while to think in those terms. There are 25.4 mm in one inch. A lot of electronics are designed in 1/10 of an inch including circuit board layout and connector spacing. 2.54 millimeters is the same as 1/10 inch. The micrometer I use is shown in Figure 2. Let’s take a close look at some of the connectors you’ll see on a regular basis. 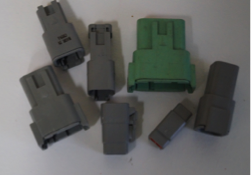 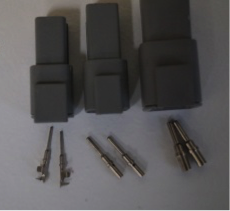 Before we get started with connector ID, let’s see if you need a little “sex education” refresher. Two connectors are shown in Figure 3. Is the connector on the left the male or the female? If you guessed male for the connector on the left, you picked what most people would guess and you’re wrong! It’s a female.  Electrical connectors are always sexed based on the electrical connection — “Pins and Sockets.” The pin side is the male and the socket side is the female.

The connectors in Figure 4 are from Deutsch and are very widely used across agriculture and industry. Ladd Industries is the exclusive world-wide distributor for Deutsch.

The DT series of Deutsch connectors is pretty straightforward. I’ve seen three different DT series connectors on lots of machines. The connectors in Figure 5 all kind of look the same with the difference being the connection size. Size directly affects the current capacity of the connector. DT-M is the smallest and is used for low current signals, 7½ amps maximum. The DT is the standard and is very popular in many applications and is good to 13 amps. The DT-P is a large connection popular for power connectors and other high current applications with 25 amp maximum capacities.

Deutsch does have the part number on each connector, but get your magnifying glass and look carefully. When you buy the connector you need, the body, pins or sockets and a wedge that keeps the connections in place and solid. The connection can be used without the wedge, but you’ve got to be very careful attaching the mating connector. 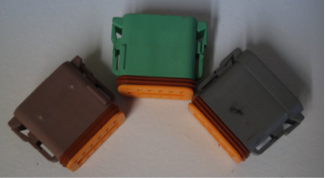 Before leaving the Deutsch connectors let me mention Amphenol. For several years, I’ve been running into connectors that are “almost,” the Deutsch DT series connectors — slightly thicker plastics and no part numbers. They are supposed to be fully compatible with the DT series from Deutsch. They only have the Grey connectors so they don’t offer keying. I’ve not tried to mix the two but they should be compatible. That word “should” always scares me.

I hope this has been helpful. In Part 2, coming next month, I will get you up to speed on the Conxall product line. They've been around for years and are used in lots of precision farming systems. ID That Connector: An Overview of the Weather-Pack Series

ID That Connector: Looking at the Compatibility of Conxall Connectors

ID That Connector: A Closer Look at the Metri-Pack Series