A Closer Look at the Metri-Pack Series

By John Dignan posted on December 30, 2015 | Posted in Equipment Compatibility

As we continue in this series, another connector that is part of the Delphi family is the Metri-Pack Series of connectors. You don’t see these a lot in general agricultural electronics but I’ll bet all the connectors on your truck or cars electrical system are part of this great connector series.

In the product directory they actually show a truck or car chassis with arrows pointing to different components on your car to identify connectors. The automotive industry seems to be standardized. Your air conditioning compressor has a particular connector as do the headlights. Wouldn’t that be something in agriculture!

A lot of the new John Deere machines are using these for all the outlying valves and sensors. Many of the PWM valve connections I’ve seen have been Metri-Pack. Once I studied the product line, it was pretty simple to follow. Each connector can be weather tight or not.

The different series connectors in the product line represent different current handling capacity of the connector. The most popular I believe are the 150 series, the 280 series and the 480 series.

The 150 series will handle from 0-14 amps and can have from one to ten cavities. The term “cavities” indicates the number of pins or sockets available. It’s also called “positions” by some companies. The pins and sockets are square or rectangular and the specifications are in square millimeters so I won’t try to interpret beyond that, other then to say, they’re small.

The 280 series will handle up to 30 amps and for basic connections, will handle eight connections or cavities. The 480 Series is the big guy. At least I thought it was big until I saw the 800 was also in the catalog with a 60 amp capacity.

If you think about it, a 48 row corn planter with electric clutches draws a lot of power. Each row needs approximately 0.5 amps, so 48 rows means 24 amps. The current draw might be 60 feet or more behind the power source, the tractor. That takes very large wires or with very large connectors. 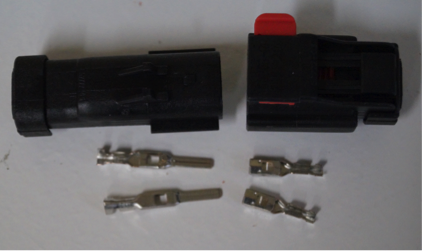 I had a heck of a time finding the connector in Fig. 1. It’s called an APEX Connector.

I first started looking and then thought I identified it as a connector I had seen on a Deere machine.

At the time, I located it as a connector from FCI Automotive connectors. Later I opened up a Case IH combine side panel to look at sensor compatibility and saw what I thought was the same connector.

Surfing the Mouser connector catalog I found the connectors again, but from Delphi. No mention of FCI Automotive. I found recently that Delphi has acquired FCI Automotive so here we go again. Part numbers are mostly the same but it’s now a Delphi Product.

I ordered from Mouser the connectors shown in the photo and they were right when they came in. I had trouble seeing the keying as it was presented in the Mouser catalog.

The little tabs on the lower part of the connector are the keying. These connectors are also color specific. If it’s a black connector is keying index “A” and if it’s gray, it’s index “B.” The connector is available from 2-14 cavities or connections. I found several different sizes on the Case IH combines running the full range of connectors.

In the fifth and final column of this series, I’ll take a look at AMP connectors. An Overview of the Weather-Pack Series

Looking at the Compatibility of Conxall Connectors

[Video] A Sneak Peek at Compatibility Enhancements from AEF