By Clair Urbain posted on December 16, 2015 | Posted in Precision Agriculture 101 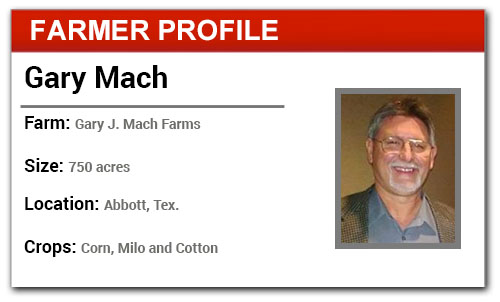 Gary Mach can be considered a third-generation dryland crop farmer in Texas. The family’s longevity in the business is due to paying for things as they can afford them, an approach Mach calls “equity farming.”

“With a crop history in this area of Texas that averages two bad years out of four, it’s the only way you can stay in business,” he says.

That means much of their equipment is used, and they’ll often buy equipment that is coming off 3 or 5-year leases at reasonable discounts, then repairing it and running it for several more years. In fact, Mach’s John Deere 9500 combine dates back to the mid-90s, and that’s the first piece of equipment that he wanted to add precision farming technology.

“The Deere dealer wouldn’t offer any way that I could update the combine to capture yield data,” he says. “They would rather sell me a new combine. I had to research other options, and settled on an Ag Leader yield and grain moisture monitor that communicates with an Integra monitor. The unit relies on a WAAS signal for location.”

That was 3 years ago, and he’s slowly incorporated precision equipment into other aspects of his operation, keeping an eye on return on investment and his options open for future additions.

He was able to update his Deere 8300 tractor to auto-steering, which he uses for ripping, winter tillage and anhydrous application as well as other field tillage passes as needed. All tillage, planting and sprayer passes use Deere’s RTK signal for guidance.

The tractor also pulls his Deere 1770 NT planter — one of the few pieces of equipment that Mach has purchased new. He variable-rate plants using SMS software to run the seeding prescription through the GreenStar 2630 monitor.

Because of Mach’s ROI approach to farming, he’s constantly asking precision farming equipment suppliers to provide the proof that this equipment investment will positively affect his bottom line. Too often, he gets blank stares and run-around reasoning.

“That’ why I have become a precision farming dealer in addition to my farming operation because I want to find the solutions that I need and know other farmers need,” he says. “In talking with farmers, I have found that in 99% of the cases, there is no one simple and consistent solution. They all have different needs.”

Mach is a dealer for Ag Leader and Norac, as well as other shortline equipment and data suppliers.

However, he continues to be frustrated by major equipment manufacturers preferring to sell newer or new equipment instead of offering ways to upgrade older equipment.

“In our area of Texas, it seems that we are behind other farming areas in our adoption of precision farming equipment,” he says. “I want to help farmers in this area find the total solution that provides the ROI they need. I don’t think anyone really provides that yet.”

Gaining an Early Appreciation for the Benefits of Precision Farming