By Ian Gronau posted on February 17, 2016 | Posted in Product Innovations

Autonomous Tractor Cooperation or ATC, a Fargo, N.D.-based company is looking to advance driverless vehicle technology in the U.S. and is working with a handful of retailers to phase in its diesel-electric motors and then its AutoDrive system based off proprietary technology called laser-radio navigation system (LRNS).

Kraig Schulz, CEO of Autonomous Tractor Cooperation or ATC, has noticed that while European farmers seem anxious to get out of the tractor cabs in favor of self-driving equipment, American and Canadian farms would rather be eased out, for many, but not all, field activities.

It’s for this reason the Fargo, N.D.-based company plans to release its proposed autonomous tractor solution in stages — giving the market a chance to warm up to the idea of completely driverless tractors. ATC has spent the last few years developing the pieces of its autonomous solution, and has begun work with 4 retailers to bring their product to market.

“From the start we were big believers that in order to make a ground-based vehicle autonomous, it was going to have to have an electric drive,” says Schulz. “That’s where we decided to start.

Much of the existing electric drive technology didn’t really work because of the high starting torque needed, Schulz says. Tractors today use their transmissions to basically transfer all their horsepower to the ground at 0 RPMs, and the industry just didn’t have an electric motor drive system that could do that. So we set out to build one, adds Schulz.

ATC developed a diesel-electric motor they call the eDrive system. Using proprietary electric wheel motors and an electronic torque controller, eDrive replaces a tractor’s transmission, differential and axles with four simple motors. Schulz says that their 400 horsepower eDrive system provides 20-30% better fuel efficiency, simplified repair, quieter operation and 20,000–25,000 hours of new life to a retrofitted tractor at a fraction of the cost of a new tractor.

“Once we had the electric drive system in place, we could start thinking about layering the guidance needed for autonomy on top of that,” says Schulz. “The vast majority of the agricultural applications use GPS for corrections right now, but just like the automobile industry realized a while ago, GPS is not going to be reliable, safe or secure enough for true autonomy on its own.”

ATC then began designing it’s AutoDrive system that is based off another piece of proprietary technology called laser-radio navigation system (LRNS).

“Autonomous automobiles are using optics and maps for guidance, but there aren’t any street signs in the field, so that obviously wasn’t going to work either,” says Schulz. “The LRNS essentially uses two radio beacons in the field that are portable and two beacons on the tractor and they all triangulate. It has much better characteristics than GPS because it’s in-field and provides a cleaner signal. Also, instead of having point-to-point estimates in linear distance like GPS that might be straight through a hill, our signal follows the contour of the land.”

For full autonomy to be possible, Schulz also notes that a user needs to have complete control over the engine, be able to stop the vehicle immediately and have the ability to sense any nearby objects or movement — what he calls perimeter safety. The final ingredient to the autonomy recipe is a learning capacity to control both the tractor and the implement in the same way that a farmer would.

“Just because we tell a tractor to plow the field in a given pattern, doesn’t mean the tractor knows how to be a farmer,” says Schulz. “It doesn’t know good from bad. We have to be able to train it just like you would a young farmer. In addition to all the controls and sensors the tractor has to have a learning capacity so it can actually understand how to farm — not just how to move.” 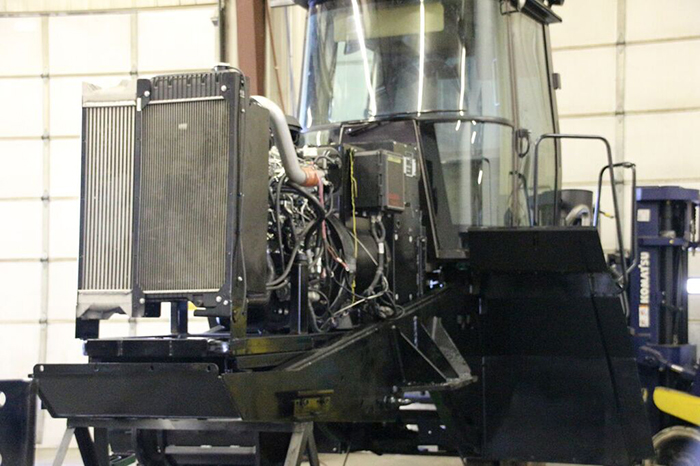 Schulz admits full implementation is still a few years off. While ATC is perfecting the technology, it must also be able to package it in a way that makes economic sense for a farmer.

ATC decided to introduce their technology incrementally to both help “ease” the farmer out of the cab and compartmentalize upgrade costs. They’ve started by launching their eDrive motors to 4 participating dealers and are currently retrofitting several tractors.

“Ideally, in the future dealers will buy the product from us and install it for their customers,” says Schulz, “With the dealers we have now, we agreed that they’d buy the first eDrive unit, and we’d install it. That way they’d have a demo tractor and a reference point for future installs. Right now we’re in the middle of installing the motors on three John Deere tractors from 100 to 400 horsepower and a 400 horsepower John Deere high clearance sprayer.”

The work that goes into a retrofit is considerable, requiring a complete strip down of the existing drivetrain which leave basically only the cab, frame and the engine if the farmer chooses not to replace it. Schulz says that in theory it won’t matter which brand of tractor is used because the various frames are similar and the principals behind the conversion are the same.

“We’re getting more interest from the independent dealers right now,” says Schulz. “We’re probably looking at something that’s going to be very demand driven initially. Once we have the eDrive out there though, farmers can have an electric tractor that they can try. Then we’ll add auto-steering, navigation and a safety perimeter so the farmer can see that the tractor knows right where it is and can safely navigate in a complex environment.

“Then we’ll layer in implement management so the farmer can train the tractor. This way, farmers and dealers can upgrade over time and get comfortable with the base technologies essentially one at a time."