Two managers from large-store complexes share their advice for getting the most out of precision specialists, including the need to ‘go to bat’ for them.

Dealers who’ve been doing precision for any period of time have seen how expectation problems, miscommunication and burnout can erode morale of what needs to be a highly performing team. To address these concerns, two precision farming managers from award-winning dealerships (H&R Agri-Power and Van Wall Equipment) shared their approach to the “soft side” of management of precision specialists, and their advice for working “on” the business instead of toiling in constant fire-fighting mode.

Heather Hardy’s first day on the job (and in a newly created department) opened her eyes to the vacuum that can exist in a dealership when it comes to the role of the precision specialists. She experienced first-hand what could be lacking when it came to the tools these employees needed to function, the priorities on the knowledge needed to succeed (and where to find it) and procedures that weren’t easily understood.

Not only was there confusion around precision-related activities for invoicing and tracking, but she realized internal championing was needed for her team, and that collaboration company wide had to be a primary goal. “But when everyone is caught up figuring out how to do business, it’s difficult to advance that goal,” she says.

She recalled that as she was getting into the new role, she’d hear from store managers who weren’t unhappy, but rather confused. “They’d say, ‘I don’t know what this precision ag specialist is doing. In the summer I never see him, in the spring his truck is out late at night and his timecards say he’s working a million hours. And then come December he’s traveling to all these meetings and then he’s suddenly back sitting in the office again.’” She learned that the managers needed perspective on precision specialists’ role and their expectations of them.

She’d also seen how reporting was not being done quickly enough — or accurately — because accounting wasn’t aware of the nuances of the precision specialist and labor sales. Other problems included onboarding of new hires and duplication of work (one example showed the precision invoicing process included 6 employees and 13 steps). The accuracy of capturing the labor, parts and service-related sales of the precision team also needed to be closely examined.

Over the past 3 years, she’s led several initiatives, from open store meetings for anyone interested in knowing what was happening in precision (not “gripe sessions,” she cautions), to onboarding checklists that take the guesswork out in a big organization (see below) and the creation of regular reports to integrate precision into the entire operation. Some changes were straightforward, while others took more time to establish operating procedures. 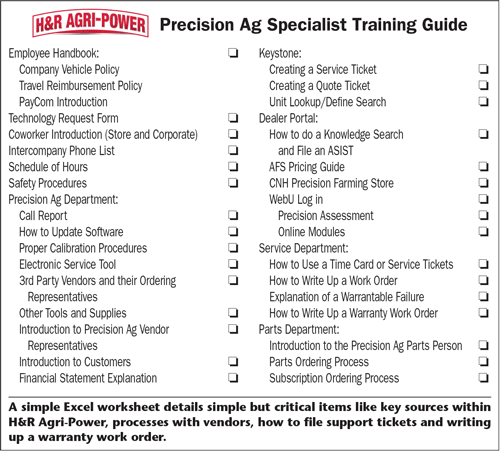 Among her jobs is “owning” the accuracy of the financial statements and bridging the gap between accounting and the precision department. An important milestone was the development of a summary report issued each month that provides the store managers with talking points for their precision specialists. “If nothing else, it forces a discussion between the manager and the specialist and opens dialog with the two and ways to find some holes or celebrate some successes,” she says.

“Being able to accurately capture our performance in a financial statement was critical because our organization runs off numbers. We also reward performance off those financial statements and our precision people now feel like they’re being incentivized because an accurate statement reflects the work that they’ve done throughout the year.”

For Van Wall Equipment’s Scott Meldrum, a precision specialist’s performance hinges on training. But it’s not enough, he says, to know how a display shuts off rows or how the auto-steer maintains straight driving. He insists that his team knows how these things impact the farmers’ bottom line, and that requires agronomic understanding.

“The precision specialist spends the most time with the farmer. He is the first one there when he starts planting in the spring and the specialist is going to be asked how to set up the planter. I make sure all of my specialists know how to set a planter so we’re not screwing up that guy’s entire year.”

He adds that the manufacturers’ winter training events in Florida are nice and Van Wall supports them, but it can’t end there. “When they come back, I make them put the stuff into practice before they go to the field so they demonstrate proficiency.”

Meldrum also stresses that servant leadership and expressing appreciation are essential to keeping precision techs motivated and performing at a high level. As an Ag Management Solutions (AMS) specialist for 4.5 years prior to his management role, he recalls what it’s like to be in the field at 11 p.m. on a Saturday night, struggling through a problem and just wanting to get the customer fixed. “I’ve got to be there for the team and answer if they call. Because by that time, they’ve exhausted all other means of support and just need some guidance.”

He adds that while he hates the term “necessary evil,” he understands that’s how precision departments are often perceived. Changing that view is another matter, but he challenged all managers at the Summit to simply say thank you. “Specialists can have some bad days, but a word of thanks at the end of a call can pick them up.” Like Hardy, he also says it’s important to champion their cause (“Praise in public, discipline in private,” he says). He also writes a bi-monthly article for the Van Wall newsletter to bring awareness to their jobs.

Noting that “precision is one of the only departments that works closely with every other one, including accounting,” he also stressed internal collaboration. For example, he wants his team to know margins and markups on parts-generated purchase orders so customers aren’t surprised.

But he also stresses external collaboration as a necessity for a successful precision specialist. “Regardless of your brand, you’ve got to play nice with those around you because there’ll come a day when you need a favor. For example, I had a grower who wanted to buy crop insurance from me (Van Wall sells programs through Farmers Mutual Hail). He had a green tractor, a blue planter and a red combine. I had to figure out how to make all that data work, and I knew nothing about the Case IH AFS Pro 700 monitor. But I had made nice with the Case IH dealer down the road and he was more than happy to help me and we got through it and we’ve reciprocated the relationship.”

The third part of his discussion focused on the precision specialist’s “ownership” of their role. He says the setting of their goals (“they must be attainable yet challenging”) is one thing, but the time to explain the why and how behind that goal, and the expectation of them, is critical. He sets goals on an annual basis but the specialists hear about the full-year goal only once. Rather, he breaks down their year into four quarterly goals.

“I’m not worried what we’re going to do in December if it’s April. So, we keep the focus on that one 12-week segment and don’t get distracted.” The rest of the conversations with each specialist (held weekly except during planting) is only about the short-term step.

He uses the free shared Google Drive system to track time, which allows all specialists to enter their time on iPads, which can turn invoices around immediately, nearly by the time the specialist has left the property.

Meldrum also shared a mantra he’s been using with his team of 11 specialists, that hits on charging for value and time, farmers’ expectation and surviving the extremely hectic days of planting and harvesting. “I want them to ‘slow down to go faster.’ You heard today how farmers need it done right the first time. So, take a second, check to make sure that what you did was right, everything is thorough, and then go on to the next farm. You’re going to cover more people in the day because you won’t need to go back to one that you didn’t set up correctly. Slow down to go faster.”

Evolving the Role of Precision Specialist from Tech to Consultant