By Clair Urbain posted on April 9, 2018 | Posted in Industry News
Pictured Above: Rapp Farms, operated by James (r) and his sons Nick (l), and Ben, farm 3,000 acres of corn and soybeans in the Princeton, Ill., area. They are going into their fifth year of strip-tilling both crops on fairly flat and rather consistent soil types in the north-central part of the state.

Rapp Farms, operated by James and his sons Nick, and Ben, farm 3,000 acres of corn and soybeans in the Princeton, Ill., area. They are going into their fifth year of strip-tilling both crops on fairly flat and rather consistent soil types in the north-central part of the state.

Their first pass in the spring is with their 24-row Wil-Rich strip-till bar outfitted with Dawn Pluribus row units pulled by their John Deere 8370 tractor. On corn, they variable-rate apply nitrogen (N), then follow with their Deere 8320 tractor pulling their 24-row 1770 planter. 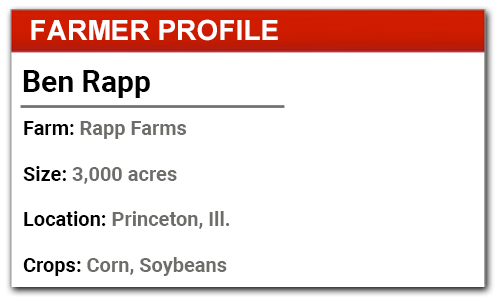 The Rapps use a GreenStar 2630 monitor in each tractor for RTK guidance. “We will be trying variable-rate seeding in 2018 on some fields with the unit,” says Ben. The planter is also outfitted with Precision Planting CleanSweeps and Martin trash cleaners

Up until 2018, the Rapps used the same plater for soybeans. However, they recently acquired a used 16-row Deere MaxEmerge planter to get a head start on soybean planting.

“We don’t do any variable-rate seeding for soybeans, however,  having a second planter will allow us to get rolling a little earlier,” Ben says. The Rapp’s fields are up to 20 miles away from each other, which means they need to switch to another radio tower for auto-guidance on outlying fields.

They will apply an additional straight rate of 28% N on corn before it gets too tall; phosphorous (P) and potassium (K) application as well as a weed control treatment are all custom-applied. At harvest, they move monitors from one of the tractors and install it into their Deere S670 combine to track yield.

Although Ben is in his mid-30s, he understands the confusion that many farmers face as they start scrolling through the setting screens on planting monitors. That’s further compounded when the Rapps upgraded the monitor in their 8370 to use the cloud to transmit and store data. The upgraded monitor now operates slightly different than the other GreenStar 2630 unit.

“The greatest benefit I see with the improved system is the ability to even up row seeding as the planter comes to uneven end rows,” he says. “The adaptive-curve tracking system in the upgrade will do that for us. It would be nice if setting changes were the same across the two units and even better if they could be made automatically, but they are not.

“There are so many factors to remember from tractor to tractor — offsets, implement widths — we need to have that all at our fingertips to make sure the settings are changed correctly.”

Ben reports the technical experts at his John Deere dealership have been helpful and the local classes on precision equipment operation have been educational. “I have been able to catch on to the settings pretty quickly, but I know some older farmers really can struggle with it. Those classes can be extremely helpful,” he concludes.