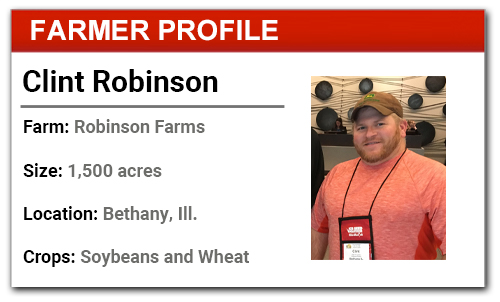 But that’s not to say he hasn’t encountered challenges, especially as he invests in more progressive technologies.

Utilizing mostly a fleet of green equipment, he’s benefited from plug-and-play capabilities and relied on his local dealerships for troubleshooting support. However, a transition to strip-till in 2014 required more intensive data collection — an evolution that has come with challenges.

He runs a 16-row Kuhn Krause Gladiator strip-till unit with a Montag dry fertilizer box mounted on it. Robinson modified the strip-till unit by removing the shanks and replacing them with coulters that pull easier yet still prepare the seedbed and place the fertilizer. The change to coulters allowed Robinson to decrease needed horsepower and replace his John Deere 9510R tractor with a Deere 8335RT.

While his fertilizer rates are fairly consistent across fields, Robinson does variable-rate apply some fertilizer along with also corn populations on 30-inch rows with his 16-row John Deere 1770 planter. In 2017, he added Precision Planting vDrive with vSet2 seed meters, SpeedTubes, DeltaForce down pressure units and CleanSweep row cleaners.

“We had our precision salesperson help us set up one row and we were able to install all of the other units,” Robinson says. “The down pressure units required some extra brackets, but everything else was straightforward. My hired man and I did the whole conversion on less than 10 days.”

The seeding rate is controlled by a Precision Planting Gen2 20/20 monitor and a Deere 2630 display provides auto-guidance. Robinson also has another planter, a 12 row Deere 7100 that he uses to plant soybeans, controlled by another 2630 monitor that they move in and out of a Deere S660 combine connected to an iPad with the Climate Corp. FieldView app to collect yield data, adjust for moisture content and create yield zones for the following year.

Point of Pain: Getting Decisions Out of Data

“The FieldView app helps me identify problem areas quickly, but when I want to have more data analyzed, especially for prescription-writing by an agronomist, I must download the data from the 2630,” he says. “It makes developing prescriptions more challenging.”

Robinson says that getting seasonal employees versed in the system is also an annual challenge. “These gentlemen are often retired guys who may help me out a week or two in a year, and it takes some one-on-one time to make sure they know what they are doing. That is especially true if they are making the strip-till pass. Not just anyone can do it there is a lot to keep an eye on,” he says.