By Libby Wawzenek posted on July 8, 2020 | Posted in Service & Support

Megan and Eric Wallendal are breaking new ground on their farm — technological ground, that is.

Megan, and her husband, Eric, both work for Alsum Farms in Grand Marsh, Wis., where they’re leading the way in their push to integrate newly developed technology into traditional farming practices.

“Using precision technology has really allowed farmers to create different kinds of management zones and actually manage their fields better, based on those zones and expectations,” Eric says.

For example, the change from grid sampling to zone sampling has proven largely successful — so successful, in fact, that Megan and Eric have further targeted their sampling methods.

“We started doing zone sampling, and then we actually moved to composite zone sampling,” she says. Rather than sending multiple samples to the laboratory to be tested, they’re able to send just one sample that comes from a composite of zones.

“That kept our cost down,” Megan Wallendal says. Because of the lowered costs, “we could go to every other year soil sampling, or even every year, rather than every 3 years of the grid sample. So we were able to get a lot more information on our field.”

Thanks to the switch to composite zone sampling in their strip-till system, not only have Megan and Eric been able to test their soil more frequently, but they’ve also been able to better tailor the work they do in each of their fields.

“If we look at it as a management zone, each field has a different target yield,” Eric says. “We have different inputs that you’re going to apply to either maximize the yield or minimize the inputs, if we know that’s a low-yielding area.”

It’s important to diminish the costs put toward fields that are historically low-yielding, he says, so that money can be spent on a different, more productive field. Some of that cost management is done through the use of variable-rate irrigation, in which areas that have a higher water-holding capacity — or that have been refilled by a rainfall — receive less water.

“We use drone imagery or satellite imagery to ensure that our practices aren’t shorting certain areas,” Eric says. Those images provide valuable information that they use to adjust their practices based on what the crops are telling them.

“We’ve had improvements every year as the technology improves,” Megan says. “We started to run just a straight variable-rate irrigation, and then we started to change that per crop. Then we realized, we can move to soil sampling to get even more of a clue on fertility, which made us move to using a variable-rate seeding rate with those zones. 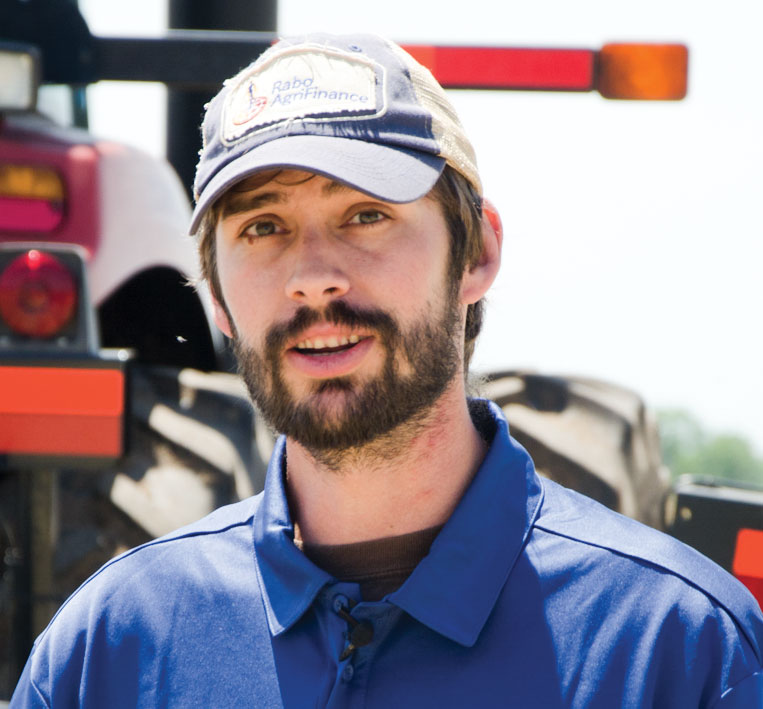 “Utilizing precision technology, we’ve been able to figure out at a micro level what each practice has done over multiple years and multiple fields and replications. We can figure out that our ROI is positive and put a dollar to the different practice that we’re doing, whether it’s $3 an acre or $25…” – Eric Wallendal

“Depending on the crop, the year and the weather timing, we were able to have a lot more tools in our toolbox. So it was definitely a step-by-step process and a learning curve.”

However, Eric emphasizes that they generally don’t fully make the shift to new farming practices without first testing them against their standard practices.

“There are a couple crops that we always use the control,” he says. “We use a new practice and we use a standard practice that we’ve done. We look at different kinds of yields, along with costs that we’ve put into trials.”

It’s important to Eric and Megan that they use a large sample size so as to ensure relevance.

“We need to do enough replications to make sure that we’re actually measuring what we’re trying to measure,” Eric says. “By utilizing precision technology, we’ve been able to figure out at a micro level what each practice has done over multiple years and multiple fields and replications. We can figure out that our ROI is positive and put a dollar to the different practice that we’re doing, whether it’s $3 an acre or $25.”

Megan emphasizes the importance of sample size when referring to harvest monitor data.

“It can’t be just two rows, or even a single pass,” she says. “It needs to be at least three passes of a combine head, not just your planter head, to be able to get the right data size. When we’re in a GIS software, we use the SMS software on the farm that and get a good data set. We try and avoid the headlands and the corners and get somewhere in the middle of the field.”

The Wallendals evaluate costs relative to yield gains for their field trials — and always maintain a control — to make a determination on whether a larger scale adoption of an application, technology or practice is economic.

“There are times in soybeans trials that we’ve actually pick up a bushel or two,” he says. “However, our cost is $12 per acre, and unless we have $14 or $16 soybeans, which we haven’t seen for a little while, even though we’re getting increased yields, it’s not worth doing that new practice.

They recall one instance where they applied a pop-up fertilizer at-plant in conventional forage corn and ended up having 15-20 acres where the product wasn’t applied. There ended up being a 6-bushel per acre difference in yield which equated to a $3 dollar difference per acre in costs, but a $6 dollar per acre difference in ROI.“We saw about $22 per acre ROI by using the pop-up product,” Eric says. “It’s good to check our best practices to make sure they are still relevant because even small changes can have a big impact on the bottom line.”

Megan attributes much of the farm’s success with precision farming technology to the research being done at Colorado State University. “Raj Khosla is kind of the father of that research,” she says. “His research has been very impactful on our farm.”

Megan and Eric have also collaborated with other universities, including the University of Wisconsin and Purdue University.

That cooperative mindset has extended beyond university research teams. They have also relied heavily on their relationships with dealers and manufacturers.

“We started doing zone sampling, and then we actually moved to composite zone sampling. Rather than sending multiple samples to the laboratory to be tested, they’re able to send just one sample that comes from a composite of zones. That kept our cost down…” – Megan Wallendal

“With the precision technology, it was a lot of back and forth with the dealers,” Megan says. “There was a lot of collaboration.”

Eric says he’s particularly gratified by the way so many dealer reps have been eager to partner with him and Megan as they push the boundaries of what they can do on their farm.

“When we go to conferences or meet with a dealer rep, they see that we’re doing new practices,” he says. “We can brainstorm with them and try new ideas. Maybe they’re coming to market with a new product, or they have a product that they’ve been wondering, ‘Can it be used like this?’ And we can come up with an idea to figure out if we can test that.”

One experience that was particularly memorable for Megan involved Orthman Mfg., and a visit they arranged with her and Eric at their farm. “They brought some visitors from a Hungarian co-op to our farm to see what we were doing,” she says. “It was very humbling.”

Because of the ways in which Megan and Eric have implemented the newest technologies and farming best practices in their daily work, dealers and manufacturers have reached out to them to initiate collaborative relationships that are beneficial to everyone.

“With the software side, like SMS, I’ve been down to their headquarters — not just for training, but to talk with them about improvements,” Megan says. They have liaised with multiple organizations in order to generate creative solutions to vexing problems.

For instance, Megan and Eric had an issue when — because of proximity to newer roads — they had to reduce row size from 30 inches to 22 inches.

“We’ve had people from John Deere or Case IH along with Orthman, trying to figure out best practices that we can do in order to help firm up the ground and retain traction on the ground and be able to still use RTK in that narrow-row configuration. [That’s] precision technology that we’ve had for years, which was failing because of a new practice,” Eric says.

“It took a lot of people together in the same room, scratching heads, trying to figure out a solution that wasn’t going to cost tens of thousands of dollars. And eventually we got it.”