Tim Norris has learned through experience that one of the best ways to generate employee buy-in and maintain high levels of staff motivation is by cultivating a shared vision.

Norris is the founder of Ag Info Tech, a precision ag dealership in central Ohio. Since stepping away from his role as Ag Info Tech CEO in 2019, Norris has worked as a consultant for his company Box Concepts Consulting, an Ohio firm that works with small businesses to help them define and reach their goals.

“It’s not good enough for you to have a vision,” he says. “You have to make sure it is known with every single person on your team at every level. The vision is definitely more effective if the team is involved and everyone is brought into making and coming up with it.”

Norris realized the importance of working with employees to collaboratively develop the company’s vision when he was hired more than 20 years ago to be the general manager of a small co-op. Within months of taking over the position, Norris found himself working to overcome multiple obstacles simultaneously, including unexpected damage to the grain bins and a devastating fire in the co-op’s chemical storage warehouse.

“I knew how to get things done, and I was good at telling people what to do,” Norris says. “That’s the way I managed. We rebuilt the warehouse. We added 4 new bins. I felt my management style was what was needed at the time to rebuild that company.”

However, once those problems were solved, Norris says his employees became complacent and were less engaged.

“The employees worked together as a team like I had never seen before to get the warehouse back up,” he says. “But once those projects were completed, it felt like my employees became content with mediocrity.”

Norris realized that if he wanted his employees to be fully invested in helping the company reach its goals, they had to be fully included in developing the vision that would guide them along the way.

“When I started to include my management team in that visioning process, we began to flourish,” Norris says.

Since then, Norris has identified 6 areas that he believes must be in alignment in order to have an empowered and engaged team. In addition to vision, he focuses on values, the team, resources, customers and culture.

Values are the Compass of an Organization

“Define your values,” Norris says. “Once those values are defined, use them in the hiring and evaluating process. Share your values up-front with a new hire. Ask them questions that see if they’re going to fit in with your values or not.”

Much like the process for developing an organization’s vision, Norris believes values should be defined and shared by the entire team.

“That’s critical to having a motivated team,” he says. “Team members enjoy working with like-minded people.” 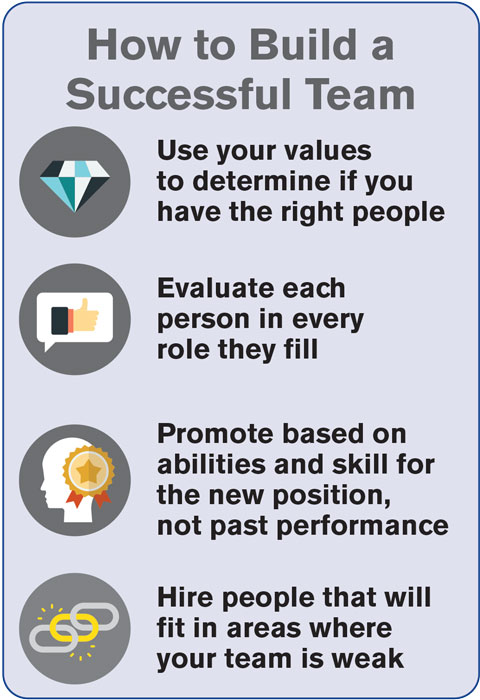 Norris’ strategy for identifying and defining shared values is to ask everyone on a team to write down the values they believe are critical to the business’ success. As those values are listed for everyone to see, he says it becomes readily apparent which ones are shared by the group.

“Get that narrowed down to 5 or 6 different values,” Norris says. “Now you have the core values for the business.”

According to Norris, it’s important that organizational leaders use those identified values as part of the employee evaluation process.

“Evaluate each team member on how they represent your company’s values,” he says. “Have a responsibility chart that has every single position in the company. If you have a person that fills 3 or 4 roles, evaluate them on each role they fill. See how they are doing in that job — do they define and represent the company values in each position they hold?

Norris acknowledges that firing employees is not an easy undertaking. However, he believes removing team members who are not working in support of the company’s shared values is an important step toward further developing organizational unity.

“As a manager, one of the hardest things for us to do is to let someone go,” Norris says.

Defining values puts managers in a position to not only make hiring and firing decisions aligned with those values, but also to use them as a tool that guides internal promotions, Norris says.

“Promote people based on their skills and qualifications, [rather than] focusing on their past performance,” he says. “Beware of setting high performers up for failure by promoting due to success of the past, not the qualifications of the future.”

If an employee has been promoted to a position that isn’t a good fit for them, Norris says there are ways to remedy the issue.

“There are several solutions,” he says. “Get that person additional training. Move those team members to a different position. Sometimes that’s a downward step, but it’s probably better than having an employee or a team member in a position where they don’t fit. Lastly, the team member leaves the company.”

Norris reiterates the importance of working proactively to set team members up for success.

“The failure of a team member is the failure of their manager,” he says. “It’s our job as managers to provide adequate training and oversight [for employees] to perform proficiently.” 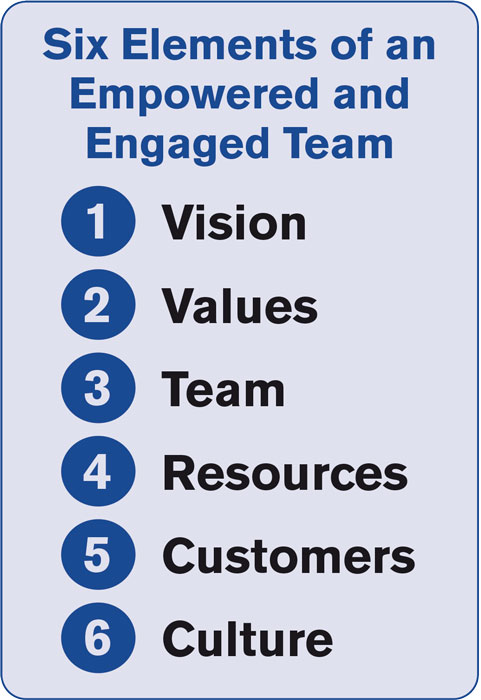 It’s not enough to hire the right people and place them in appropriate positions. According to Norris, once a team is assembled, it’s imperative to provide them with resources that will help facilitate the team’s success.

“If that team doesn’t have the right resources, no matter how good that team member is, they’re probably not going to succeed,” he says. “Ensure they have proper training for the job. Having a highly organized and effective team can make all the difference in the world to your customer.”

Supporting employees with appropriate resources is crucial in an industry that supports farmers in maintaining their livelihood, Norris says.

“You’re working on something at the heart of that farmer’s operation when you work on a corn planter or their tractor or combine,” he says.

“Having a team that has the proper resources to get things done is essential. Having policies and procedures in place that ensure everyone involved — including the customer — knows what’s going on is essential. That instills a ton of confidence in your team and in the customer.”

Although it takes time and diligence, Norris finds it helpful to ask each team member to sit down and write down every aspect of their job, including policies and procedures for those various tasks. It’s an undertaking employees may resist, he says, but having those specific job descriptions will be a lifesaver when a new employee is hired for an existing role.

“When the person that did our billing and accounting quit, we went to the policies and procedures” that employee had previously documented, Norris said. “She had [recorded] exactly what we needed to do. That helped when we trained the new person to take her place. We had everything lined out that she needed to do.

“Make sure you take time to have those proper resources and policies and procedures documented.”

Once the proper team is assembled and trained, it’s important to consider what kind of customer you want to target, Norris says, and market directly to them.

“Think how much more enjoyable your workday would be if you’re working all the time — or most of the time — with the right customers,” he says. “This doesn’t mean you won’t serve everyone, but try to market and spend most of your sales efforts attracting those right customers.”

According to Norris, once you identify the customer you’re looking to target, you can incorporate words and phrases that will catch their attention into your marketing materials.

For example, when he was with Ag Info Tech, Norris and his team identified their ideal customer as someone who highly values the return on investment (ROI) in their farming operation. To attract the attention of those customers, Norris’s team worked to put ROI numbers on all of their products and services.

Finally, Norris stresses the importance of the management team working together to intentionally establish the kind of workplace culture they value.

“Whatever you do, cultivate that culture from the top in every single thing you say and do.”

How to Prepare Your Dealership for Autonomy

Turning Data Into Efficiency to Boost Your Precision Business

Master Precision Management at Your Dealership

Master Precision Management at Your Dealership