By Ian Gronau posted on November 4, 2015 | Posted in Dealer Development

Darcy Hutchison, PLM specialist at Rathell Farm Equipment in Cordova, Md., isn’t terribly concerned about shrinking precision sales in the current market because he feels that as a small, single-store location the New Holland dealership is flexible enough to respond to conditions.

Like many dealers, Darcy Hutchison, precision land management (PLM) specialist at Rathell Farm Equipment in Cordova, Md., has seen equipment sales shrink this year, and he also senses that precision sales may be reaching a plateau in his area — at least for the time being.

But Hutchison is also comforted that Rathell has an advantage as a single location New Holland dealership with a one-man precision department.

“A few years ago it was a different story,” he says. “We were selling so much aftermarket precision equipment that it was hard to stay on top of it, but this year it’s been backwards. I’m glad our precision department didn’t expand too much at that time, because to some degree we’d be in trouble right now.”

Hutchison feels that while it may be different elsewhere, their market is slowing because of lower commodity prices, an aging customer base and precision equipment saturation. On the eastern shore of the Chesapeake Bay where the dealer is located, he says most of his customers are using precision equipment for spreading chicken litter.

“With chicken litter, everybody in our area started out in precision by getting a lightbar,” says Hutchison. “We didn’t have too much luck selling the Trimble EZ-Guide 250 because it wasn’t very user friendly, but when the FM-750 displays came out with a bigger touch screen, I had an easier time making sales.

“We sold some EZ-Steers to those customers too. But on one hand, so many of our older customers aren’t interested in learning how to use the equipment and on the other hand so much of it is coming standard on new tractors and combines — so a lot of the people who were going to buy in, already have.”

The situation isn’t too much better on the GPS correction service either. Most of Hutchison’s customers use Wide Area Augmentation System (WAAS) for corrections because it’s sufficient for their needs and they don’t see the value in an accuracy upgrade. 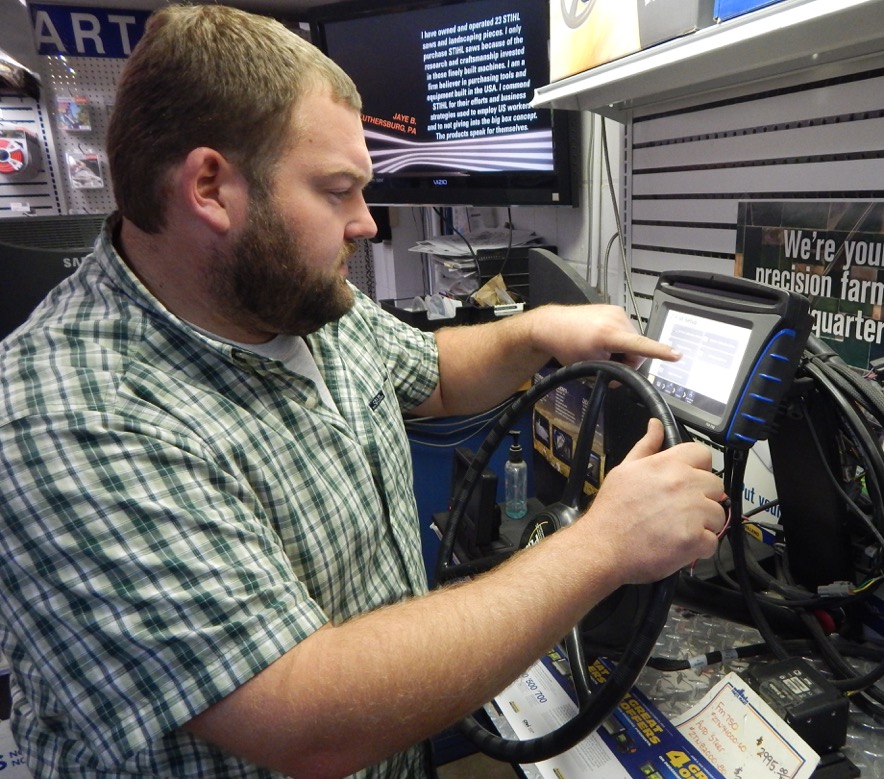 Hutchison says they didn’t have much luck selling Trimble EZ-Guide 250s because they weren’t user friendly, but the FM-750 displays were much more appealing to his customers. However, he thinks that precision sales in general are beginning to plateau in his area.

“For spreading litter, a lot of guys don’t care if they’re 6 feet off so long as they’re going straight,” says Hutchison. “We’ve been able to move our customers who do more spraying over to RangePoint RTX and guys planting corn over to CenterPoint RTX, but now those sales are starting to slow down, too.”

There is the hope that more advanced aftermarket precision equipment being released may spur some demand, but with his customers on such tight budgets, it may not make much difference.

But comparing their operation to a nearby multi-location dealer with a larger precision department, Hutchison says there are advantages to having a smaller precision staff in this market.

“Because we’re smaller, there are always things I can do in other departments to stay busy if precision sales slow down,” says Hutchison. “The service aspect isn’t going away, and the components we have in the field will always need to be maintained, but I can also help with other dealership service and sales. It’s good to not be pigeonholed.”

Rathell’s competition does have a planter line which opens the door to a wider variety of precision sales. But, the added inventory and manpower needed in spring could leave them vulnerable to a prolonged drop in sales.

“Not having a planter line hurts us a bit on the opportunity side, but it helps us to stay level rather needing a surge of manpower in the spring,” says Hutchison. “If someone is hired for precision with no mechanical background, they might be struggling right now because they can’t help out anywhere else. We’re small enough to adjust to the market rather than having to make cuts.”

Pinning Down the Role of a Precision Specialist

[Video] The Benefits of Being Known as a Niche Dealership

Avoid Being a Precision Outlaw