Emphasis on agronomic and data management services contribute to a majority of dealers forecasting measurable precision growth in 2017.

It’s been a challenging few years for many precision farming dealers navigating the instability of the commodities market and cautious purchasing habits of customers.

But the results of this year’s fifth annual Precision Farming Dealer benchmark study — with contributions from 120 farm equipment dealers, input retailers and independent precision companies — signal an optimistic shift in retailers’ revenue expectations and business objectives compared to recent years. Talking with dealers during the first part 2017, there seems to be more confidence and less concern about the current ag market.

Says one precision farming manager at a Midwest equipment dealership, “The last few years have forced us to be more creative, but they have also been our 3 most profitable years. Dealers who have been able to adapt and learn in a down market are going to be the better for it and we’re already seeing that positively reflected in our bottom line.”

While challenges remain — training voids, market saturation and crop prices — this year’s report reveals a revival of agronomic and data management-driven services, along with an emphasis on recurring revenue sources.

During the last few years, dealers have been extremely conservative with their revenue growth projections, reflecting their customers’ more prudent purchasing habits.

But this year’s benchmark study reveals a reversal in recent revenue trends. Based on responses gathered during the first quarter of 2017 from 28 different states and Canada, 23% of dealers reported 2016 precision revenue growth of 8% or more, more than doubling their forecast (10%) from last year’s report.

It’s worth noting that 75.6% of respondents identified themselves as traditional farm equipment dealers, the lowest figure since the study began tracking business structure in 2015. Among this group, 41.8% reported 2016 revenue growth of at least 2%.

Some 16% of respondents classified themselves as independent precision dealers, with 66.7% of this group reporting at least 2% revenue growth in 2016.

Seed, chemical or fertilizer retailers participating in the study increased year-over-year, from 4 to 8.4%. Some 40% of this group reported revenue growth of 2% or more in 2016, including 30% who saw growth of 8% or more.

For dealerships with 11 or more stores, 52.9% reported 2016 revenue growth of 2% or more. But interestingly, nearly one-third reported revenue declines of at least 2%. Only 17.7% indicated little or no change to their precision revenue.

Fewer dealers are also anticipating measurable revenue declines in 2017. Only 11.5% are forecasting a dip of 2% or more, by far the lowest total in the history of the study. Only 4.8% of dealers are projecting revenue decreases of 8% or more.

Some 28.9% of dealers forecast little or no change in their precision revenue year-over-year.

Both large (11+ stores) and 1-2 location dealerships forecast comparable growth to the overall group, with 58% from each segment projecting growth of at least 2%. Only about 11% from each group anticipate revenue declines of at least 2%.

There are more dramatic differences in revenue projections among dealerships types. Some 80% of independent precision dealers forecast revenue growth of at least 2%, compared to 58.3% for farm equipment dealers and 40% for seed and fertilizer retailers. 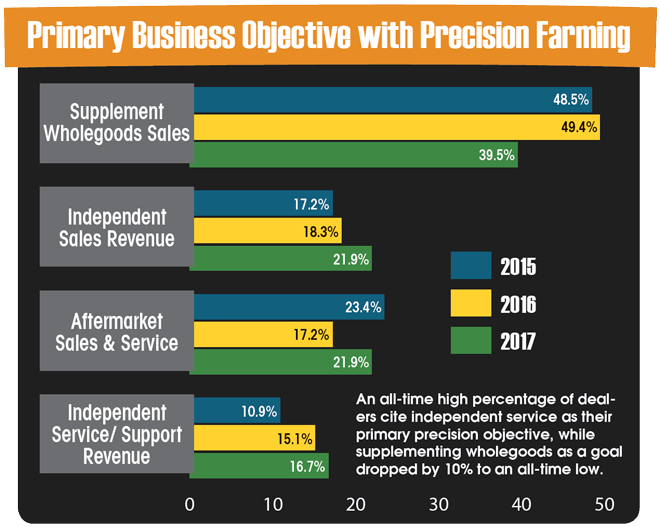 It’s worth noting that despite the overall optimism, there is still concern among respondents about how the ag economy could influence farmers’ willingness to invest in technology.

Says one dealer from Ohio, “Low income levels have slowed the demand for services. We need to convince customers the economic data that will be generated by technology can help them make better input decisions.”

Adds another dealer from Idaho, “Farmers are willing to keep older technology in their tractors and equipment. Trading up or upgrading is not going to be a number one priority for them this year. We are gearing up to provide exceptional service to these customers by doing more customer training and field days so we can keep their business in the years to come.”

While dealers are seeing revenue rebound, it’s not necessarily being driven by hardware sales. Some 48.6% of revenue — the lowest percentage in the 5 year history of the study — is coming from component sales.

Despite a small rebound last year, the percentage of revenue generated by hardware sales has dropped every year from its 62% peak in 2013. Dealers often point to market saturation and competition as contributing factors to decreasing margins on precision products.

“One of our biggest challenges is dealing with low margin competitors,” says one precision farming manager in Wisconsin. “We must hold our margins. We will not take low margin deals, so we may be out of a deal just on price.”

An alternative approach to rooting revenue in hardware is emphasizing the service side of precision. While this can be an equally competitive market, it is one which dealers have had success separating themselves from the competition.

Some 17.1% of 2017 revenue comes from ag technology service and support, nearly identical to last year’s 17.3%, but below the 22.2% total in 2015. Still, developing more recurring streams of revenue has been a focal point for dealers and another area of opportunity that bounced back in 2017 was data management services.

After dropping 3 points in 2016 to 5.3%, data management rebounded to its 2015 level of revenue in this year’s study at 8.3%. Although still a small percentage of overall revenue, there is momentum toward transitioning into more agronomic services.

“Data is the easiest way to prove ROI,” says one Wisconsin precision farming manager. “But you have to know your market.”

For the fifth consecutive year, the majority of respondents said their primary objective with precision farming is to supplement wholegoods sales. But it was also the lowest percentage — 39.5% — in the history of the study as more independent objectives gained ground. 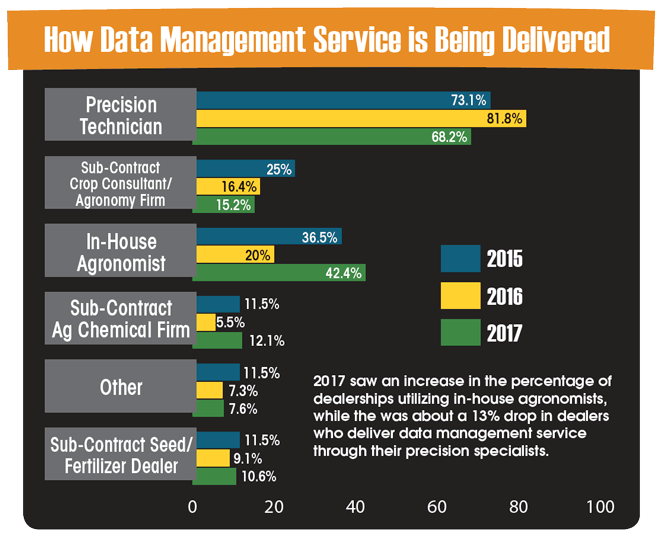 Some 21.9% of dealers said their primary goal with their precision business is independent sales of hardware and products, up about 3 points over 2016 and 4 points over 2015. However, this is still well below the high of 28.6% in 2014.

Also on the rise for the third year in a row was independent service and support as the primary objective with precision business, with a high of 16.7%, after a previous high of 15.1% in 2016.

As was discussed at the 2017 Precision Farming Dealer Summit in St. Louis, dealers are pricing and packaging precision services to retain customers, while also leveraging support plans to attract new ones.

“We have about 165 solid customers that we deal with yearly on a face-to-face basis, so I asked some our best farmers what they thought would be fair to include in a package,” says Nathan Zimmerman, precision farming manager with A.C. McCartney in Illinois. “One of the things we realized is that we have a lot of customers who maybe only bought 1 piece of equipment or technology from us. How would we sell them a comprehensive package if we don’t really have a reason to talk to them during planting season because they don’t have a product we sold them?”

The solution was to give customers choices and essentially build their own service plans. The dealership started with a $300 base plan that includes unlimited phone support, 2 technology training classes per year, free loaner hardware and a 10% discount on technology parts and labor. Then the dealership offers discounted add-on services that customers can purchase outside of the annual service plan, including pre-season inspections ($100 per unit), yield monitor calibrations ($75 per crop) and yield map printing ($10 per field).

“In some cases, it’s a 50% discount on those additional services for customers who enroll in our annual base service plan, which has been an effective selling point,” Zimmerman says. “We rolled the plans out in 2016 and about 30% of our solid customers signed up, and at the end of the year, 15% had already renewed, so they are seeing the value.”

It makes sense that more farmers are holding onto their equipment longer during the downturn, and therefore less precision hardware is being sold installed on new equipment.

Says one dealer, “Our biggest challenge will be more aftermarket systems coming into the area at cheaper prices. We plan to deal with this situation by offering a better service deal and more customer training.”

The percentage of aftermarket precision products being sold remained consistent year-over-year, with 47.8% this year, vs. 48% in 2016. However, these are both behind 2014 and 2015 totals, which both topped 52%.

After 3 years of incremental growth, used equipment as a sales channel dipped slightly from 10% last year to 9.8% in 2017.