Scope and structure of billing out precision services continues to evolve as more dealers opt for agronomy-focused offerings and a per-acre charge.

The last few years have seen dealers transition service offerings — some with subtle shifts in scope of support options — and others with more dramatic expansions. With a goal of generating more recurring revenue, dealers are also looking to fill service voids for customers.

This includes increasing emphasis on agronomic or data-driven services and training. As noted in last year’s report, dealers had seemingly taken a step back in these areas in 2016, but there has been renewed momentum the last 2 years. 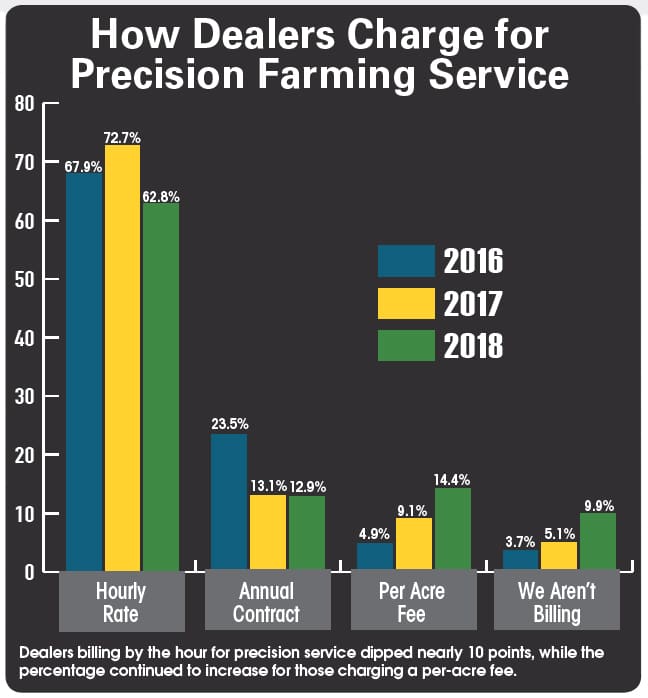 Included in that training is a web-based class that Kaczynski describes as Agronomy 101 and 102. Dorsey created a training video using animation to highlight some of the aspects of agronomy, including the importance of understanding the difference between soil and dirt when talking with a farmer.

“Everyone goes through the training to help tie equipment to agronomy,” Kaczynski says. “We want our employees to understand that even though they might not view themselves as experts, they’ll be more successful selling equipment if they can talk more intelligently and have a better understanding of what the technology in precision ag is doing and how it relates to growing crops and agronomy.

However, the percentage of precision specialists providing agronomic or data management support continued to decline, to a 3-year low of 63.2% in 2018. Though still the most popular — and perhaps the most practical way for many dealers to deploy agronomic offerings — there are a range of other outlets, internal and external, to connect with customers.

Interestingly, 14% of 2018 respondents chose “other” as their delivery method, which included offering agronomic service though the finance department and water management platforms.

While 2018 data reflects a modest shift in how dealers are delivering agronomic services, 57.3% say they do offer these types of support options in conjunction with hardware sales — continuing a 3-year upward trend.

This year’s list of precision services again revealed some notable declines — especially for hardware-related offerings. For the third year in a row, dealers offering GPS and RTK signal subscriptions dropped from 78.4% in 2017 to 75.4%, after peaking at 96.8% in 2015.

Employee compensation is increasingly competitive, as dealers vie for talented technicians, managers and agronomists. Not only are dealers trying to protect talent from industry headhunters, they must also guard against burnout and specialists leaving the industry altogether.

Says one input retailer from the Midwest, “Our biggest challenge is the lack of people in the industry willing to do this job. The stress load is large, the hours are terrible and the customers are demanding.”

But it’s also a job that has many passionate and dedicated professionals who enjoy a high level of satisfaction through problem-solving. Looking at the breakdown of precision salaries for 2018, dealers are paying more for entry-level specialists and in-house agronomists than last year.

Attracting talent with a solid wage is one thing; keeping quality staff is another. Some 55% of dealers pay at least $56,000 for experienced specialists, up from the 2017 total of 44.7%.

While compensation is an important element in hiring and retention, it’s not the only thing today’s precision employees are looking for in a job. At this year’s Precision Farming Dealer Summit in Louisville, precision-farming recruiter T.J. Stauffer noted, “You think sometimes people want more money, but I’ll tell you right now, every precision specialist I’ve talked to would rather have more flexibility than more money.”

A new addition to the list of services is aerial imagery/analysis. Some 40.6% of dealers offer this option and it will be interesting to see how this number changes in the coming years.

One of the ongoing challenges for dealers is finding a consistent, competitive method for billing out precision services. The percentage of dealers offering a precision service package stayed relatively flat, increasing by less than 1 point to 47.1%.

This marks the second straight year the total was below 50%, and it could be that dealers are getting more creative with how they bundle and bill services. Talking with some retailers during the last year, several said they developed and market-tested small-scale precision service platforms, which allowed customers to pick and choose from a menu of support options.

This can also extend to some flexibility as to how services are being billed. After an uptick in 2017, the percentage of dealers billing by the hour fell to a low of 62.9% in this year’s study, while 12.9% said they use annual contracts, nearly identical to last year (13.1%).

For the second straight year, per-acre fees increased, starting at 4.9% in 2016, to 9.1% last year and 14.4% in 2018. This isn’t surprising, given the aforementioned increase in dealers offering agronomic-oriented services.

Perhaps a more telling statistic is the increasing percentage of dealers who say they aren’t billing for precision service. Starting at 3.7% in 2016, the number modestly increased to 5.1% last year then nearly doubled to 9.9% in 2018.

While dealers are experimenting with different billing combinations to attract customers, it’s still a challenge for specialists to recoup the cost of their time. Says one farm equipment dealer in Iowa, “Collecting the actual value of the service delivered remains difficult. We are starting to keep track of hours spent on service contracts to show profit or loss per customer. Perhaps one alternative to consider is charging per system and not per customer.”