Controlling customers’ costs and reducing risk are gateways to move a precision business beyond a ‘start with the sale’ mentality.

Pictured Above: Jim Henderson, executive partner with The Exemplary Group, a business consulting firm working with ag dealerships, is no stranger to the start-up experience and the notion that hardware company employees are “systems integrators” trained on multiple skillsets and abilities to serve customers. He sees the same model taking shape in agriculture, particularly within the precision farming business of dealerships.

If I were a dealer, I would want to get involved in integrating systems because it helped our company so much. When I started my systems integration company, there were a lot of things that hindered our company’s success, but if you compare where we were to where we are now, we’re so much better. You can compare your company to ours and that’ll help you get moving.

From my understanding of the precision farming world, we’re in a position where we’re combining mechanical technology, biotechnology and information technology, but I haven’t heard how to bring the three together.

One of the most important lessons I learned was when you integrate a solution, two events can happen: either the solution works well together and you reduce a lot of risk for the customer, or you become part of the customer’s fabric. You can do software integration or data integration.

There are three components here to understand: the main products you have, the integration tool and the customers’ systems they have already implemented. The key is to build the team to bring those components together. What we did was take hardware and software products, link the three together and integrate it into the company’s systems.

The biggest mistake I made with my company was that I assumed that the technology would commoditize. Everybody would jump to the cheaper software. I was wrong. Once people had a solution, they didn’t change and stayed with it. You should question if it’s worth doing and if it’ll help your business.

An example of executing our lessons could be Crossing the Chasm by Geoffrey Moore. This is based on a 1950 hybrid corn study that began to show what early adopters were. There are the early mainstream, the late mainstream and the laggards.

When we were starting, we thought we would have a 4-6 month sale cycle. Well, 6 months turned into a year and that turned in 18 months. Finally, after 30 months we got our first sale with the early adopters. They were people who were brave enough and wanted to make that change.

The thing I would warn you about is the latter part of the bell curve, the chasm; I call it the Cashflow ‘Valley of Death.’ If you’re managing cashflow for your company, or you’re worried about it, this is going to be the part that’s going to keep you up at night. This is where systems integrate. 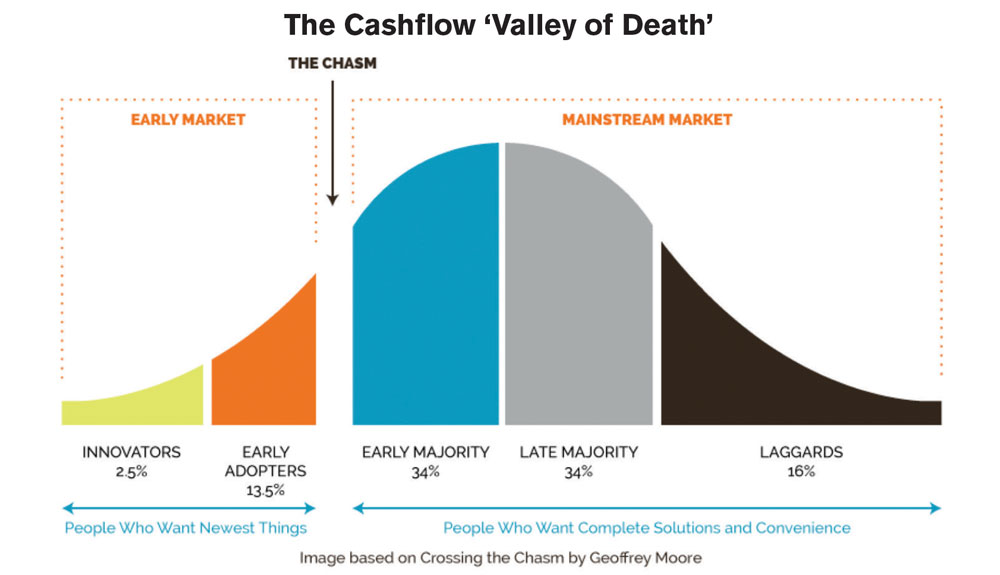 Jim Henderson, executive partner with the Exemplary Group, cautioned dealers to prepare for the Cashflow ‘Valley of Death,’ a bell curve of business growth. “If you’re managing cash flow for your company, or you’re worried about it, the Chasm is going to be the part that’s going to keep you up at night. This is where systems integrate,” he says.

Unlike an equipment dealer, it’s not capital intensive. You don’t have millions of dollars of equipment sitting around that you have to fund. It is cashflow intensive, so that’s what you have to prepare for. This cash is going to take a while to get through, so you have to plan that cash flow to get through that. Once we got over the chasm, it was great. We made the Inc. 500 by growing very rapidly, but that part was the hard part. That is a critical part of this process and you need to understand it thoroughly.

Now, the other part that I learned was to not start with the sale — start with the solution. The worst mistake we made was when we hired proven salespeople who could come in and sell. They were used to having structure and well-done products. Foreign competitors have come in with cheaper scanners, so we lose deals and our primary products get bought by a new company. This led us to a valuable lesson: we have to understand what our customers want by surveying.

The second part we learned was that we had to have a sandbox. Today there’s some conversation about testing products yourself. Because we didn’t have a lot of cash, we had a simple philosophy. We did demos for free and we charge for pilots. What we learned was people would say ‘Oh, if you can show me that you can do that we’ll buy it.’

We learned that it’s beneficial to survey rather than trying it ourselves because if a customer is piloting it, we’ll have them pay. After that we can move to sales and support. The selling taught us how to be consultative because it had to be solution oriented, which was a valuable lesson for us. The support is where we make the most profit. And I think for equipment and precision dealers, you’re used to a model where you sell equipment and it generates this aftermarket revenue.

When you move to a software and integrated solution model, the same thing can happen. You’re going to get that revenue on subscriptions and on total support. We started charging for support because we had a problem that almost sunk our company.

We had an insurance company that called and said they can’t find any of our documents. And for insurance companies, that’s like a farmer saying all of our corn is gone. Long story short, we were able to recover most of the information. We started to try to figure out how this happened, but it turned out they had warning signals, but they didn’t want to call us because we charge by the hour for support.

After this instance, we decided we would do unlimited support and include it in the original sale. We were terrified wondering if people would call all the time. Nobody called more than they had been previously. But it actually became an advantage because we did upgrade assurance and made sure everyone had the latest technology so that this didn’t happen again.

The way you package this is going to be crucial in what you do. As technology continues to evolve, I can’t have a salesperson drop the project off and have them go through it — I need to do it to make sure it works correctly. The project side of our team became really important in building us. There are a few great foundational principles that we learned here.

“If a sale isn’t closing and you don’t know why, it’s almost always because of risk…” – Jim Henderson

Now I want to talk about business growth. It starts with a sale, a solution sale and a consultative sale and they go through three parts: need, evaluation of alternatives and taking action. The only thing people worry about is if you can meet their needs and if the solution is right.

When they go to buy, risk moves up to the top. I learned that risk is never articulated, or if it is, it happens very rarely. If you tell customers stories at the beginning, you can eliminate risk at the end. If a sale isn’t closing and you don’t know why, it’s almost always because of risk.

So how do you eliminate risk for them? There are a couple lessons we learned. Being in rural areas was a big advantage for us keeping people, because if you’re in a big city you have a lot of competition for technical resources. If you’re sharp and technical you want to be close to home, this is a great way to keep people. We did it, and once we did it that’s part of what made our sales take off.

The second thing we learned with our teams is the peak that you go through in the precision side is a big challenge. We used to have huge peaks around our project implementations. People would have to travel, so we would stop and say ‘Hey, we’re going to go ahead and give you comp time.’ If your people are salary employees, I would argue that you can make the peaks an advantage by giving them time off in this window. That worked very well for us. We had a culture that was very family friendly and we tended to work on that very hard.

Business consultant Clayton Christianson says that disruptive innovation comes from under served customers at small farms. Small farms gain $100 a month in sales, so it would not surprise me if small farms lead to some of the innovation that comes out of here.

Particularly for equipment dealers, I think that’s very hard. You’re focused on your highest profitable customers and incrementally improving them. And the real disruption will come from the under served ones. So, if I were moving toward technology today in this industry, I might look at that and wonder if we need to integrate those. Do we actually want to resell them? Should we be involved with them?

A lot of the problems today are about the cost. Farmers today want to know how to control cost, so being an integrator will help you and you can help them understand the solutions.

Precision Progress: The Evolution from Specialist to ‘Systems Integrator’

[Podcast] How Can You Become the ‘Value-Added Dealer?’

In the Field: Leasing Technology Can Lead to Long-Term Sales Potential

A week into the new year, one of the carryover lessons learned by precision dealers in 2020 was that they either need to learn how to disrupt the way they do business, or risk being disrupted. Wrapped around this concept is the question of how dealers will help their customers be more profitable with where and when they invest in ag technology products and services.
View More
Top Directory Listings